Important NPCs:
Mnemon (notice a theme here yet?).
One of her sorcery professors at the Heptagram (totally not a sidereal).
Childhood friend who unexpectedly failed to exalt. May or may not secretly resent Aisa. Quiet, demure, unfailingly polite.
Another graduate of her year, V’Neef Iphen, halfway in love with her (unreciprocated). Currently back at the Heptagram for additional studies.
Jal’Kaith, the Jokun (Retainer). Earth elemental bodyguard that Aisa summons repeatedly and continuously (except for rare “vacations”). Technically bound to the task “protect me”, but always willingly. He considers himself Aisa’s bodyguard, having taken a liking to the foolish little dragon. Almost always nearby dematerialized.
Ai’Zul, the Cloud Person (Retainer). Air elemental that Aisa summons repeatedly and continuously (except for Ai’Zul’s “vacations”). Technically bound as a servant, but always willingly. Curious and flighty, Aisa has caught her continued attention by dint of being just so darned interesting. Often used as a dematerialized spy.

Other Details:
It doesn’t come across in the backstory very well, but she’s A) willing to deal with just about anyone (anything) and B) actually quite a bit innocent and a little naive. Everything so far in her life has gone her way – no experience with real hardship (other than a little physical while traveling the threshold).

“Oh, of course it couldn’t be me! I’m much too young, barely older than the Scarlet Empress when she ascended, I’m nobody… but no one hates me like they do Grandmother… and I am direct matrilineal descendant of the Empress… and hmmm… I don’t say anything, ok? Of course I’m supporting Mnemon.” (smiles disarmingly) “…I wonder…”

It’s outside your initial pitch for the game, but I’d be quite pleased if Aisa were the candidate the conspiracy were putting forth. Everything you said still applies – if I fail to post or disappear, it’s no bigger a deal to make her an NPC or ignore her (busy with other things) than any other character.

Backstory:
Aisa is the darling of the Dynasty. Granddaughter of Mnemon, great granddaughter of the Empress, breeding to make other scions of the house green with envy. Bright, energetic and impudent but with a core of inner discipline that makes those traits charming rather than unbecoming a Prince of the Earth. No one minds if you Exalt off-aspect when you do it at the age of 13.

Idolizing Mnemon, naturally she attended the Heptagram. With her lineage, naturally she was top of the class. She toured the Scavenger Lands for several years after graduation before finally deciding that the Realm is the only place she can satisfy her true ambition – to live up to the legacy of her bloodline.
Backgrounds: Breeding. More Breeding. Artifact (a couple of useful, and very secret, tricks). Henchmen. Family (Mnemon). Reputation (Ambitious prodigy). Connections (Heptagram graduates). 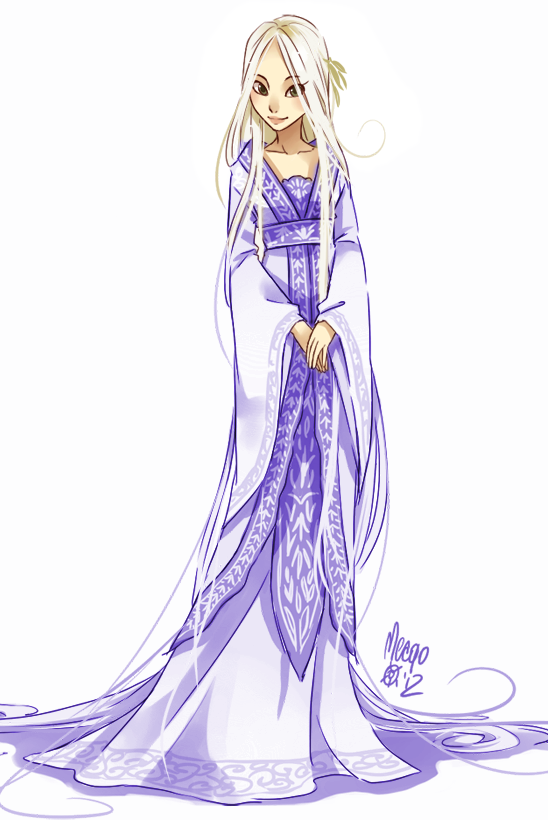